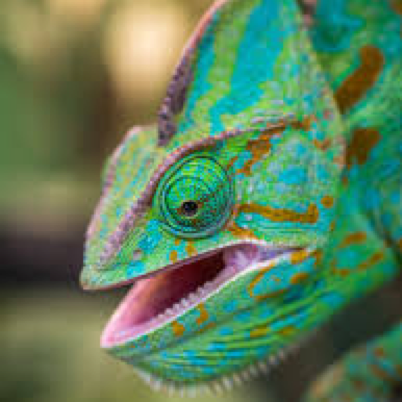 In episode 1 of David Attenborough’s Natural Curiosities Season 1, one sees chameleons change their colors to either camouflage or communicate. Through multiple experiments, researchers observed a common sequence of defensive behaviors that the chameleons employed. They would first slowly turn behind the branch that they were perched upon to further hide themselves; then they would move slowly towards the center of the bush [1]. Their last defensive measures included fleeing towards cover, hissing, and dropping to the ground to escape [1]. However, researchers found that chameleons, which move very slowly, must rely on “cryptic coloration” to escape predation, and that they try to “resemble that of surrounding vegetation” as the first line of defense [1]. In the case of chameleons, the fittest creature is not the fastest or the strongest, but the one that can camouflage the best with its surroundings.

This color change is also a way that this species will communicate their mood with each other. A study found that females will display “temporary body color changes during the reproductive season” and that these signals are “used in intersex communication” [2]. Females that display typical mating season colors have significantly higher mating frequency than females that display gravid coloration, which have a significantly higher aggressive rejection frequency [2]. Like the documentary shows, dominant territorial lizards will exhibit brighter colors, and the subordinate males will be much less intensely colored [3].

Similar environmental impacts on coloration affect other reptiles like the sunwatcher, toadhead agama, and the bearded dragon lizard. In one study with sunwatchers and agamas, scientists found that the amount of light the organisms receives affects the level of grey gradient on their dorsal side [4]. Sunwatchers become darker with increasing light intensity as a form of “thermoregulatory adaptation,” and agamas become lighter with increasing light intensity to avoid predation [4]. In bearded dragon lizards, brighter “luminance and saturation” is observed in spring as a potential “adaptation to the greater thermal and/or signaling needs of that time” [5]. In the spring, these lizards change from “dark grey to light yellowish or orange-brown” [5].

Chameleons are incredible creatures that use their command of color to their advantage. Whether it is to camouflage or to communicate with other chameleons nearby, these organisms are not afraid to show some color. This trait is not exclusive to this species though, and is seen in many other reptiles. Maybe one day we will see this trait evolve in more reptilian species!