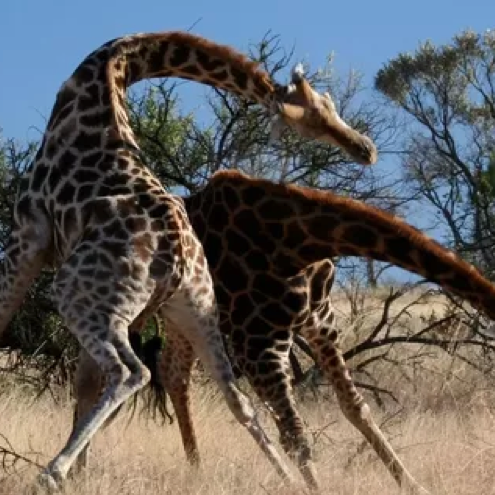 There are many misconceptions regarding the physiology of one of the most bizarre denizens of Africa’s plains: giraffes. First and foremost amongst these misconceptions is the origin behind the giraffe’s elongated necks. Several different theories exist to explain this physiological oddity, though none of them have been conclusively proven as the primary reason for the feature.

First amongst them is the idea that elongated necks help the giraffe access food sources that would otherwise be unreachable. This notion is supported by food competition that commonly occurs within giraffe populations [1]. During dry seasons when food becomes scarcer, giraffes with longer necks are able to access food sources that others cannot, increasing their overall odds of survival [2]. This provides a selective pressure on giraffe populations to grow progressively longer necks in order to survive [2]. Standing in direct contrast to this hypothesis, however, is the high energetic cost of growing and maintaining long necks.

Another attempt to explain the presence of long necks is male-male competition within giraffe populations [3]. This competition is based around two primary factors: territorial conflict and mating. Given the limited availability of food within the natural habitats of giraffes (especially during dry seasons), maintaining temporary control over feeding grounds can be key to ensuring survival. Males of the species often end up directly competing for very limited food resources in their habitats [4]. As a result, elongated and strengthened necks, traits that are positively selected for in giraffe populations, generally enable better maintenance of territory and thus better survival [3].

Similarly, elongated and stronger necks have also been correlated with higher levels of success in mating [1]. Longer necks enable giraffes to better fight off competitors for mates, and the trait has also been shown to be favored by females when it comes to mate selection [3]. Competition for mates can also occur without direct combat between individuals, generally taking the form of ostentatious displays of necks as a sign of good health due to the aforementioned high energetic costs [3].

Bearing all the above evidence in mind, it is apparent that there are many factors that could contribute select for giraffes to have longer necks. Not only are there external, ecological selective pressures that make long necks favorable, but sexual selection and territorial concerns also play a significant role in patterns of neck growth amongst male giraffes.