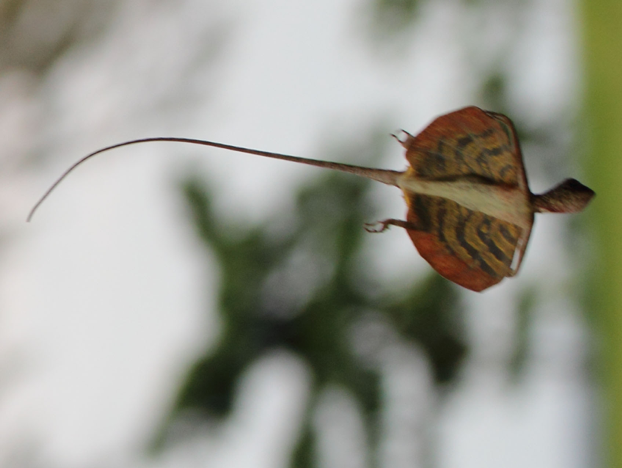 At first glance the Draco lizard looks like your typical lizard, a small scaly reptile with clawed feet and a long tail. However, these lizards have an extraordinary feature that allows them to easily travel throughout their environment. The Draco lizards have wings! These wings are not analogous to the wings of a bird, but rather seen as skin-like flaps along the sides of their body called patagiums. Patagiums allow Draco lizards to glide in the air from tree to tree [1]. Draco lizards are found in the rainforests of Southeast Asia and are strictly arboreal, which makes their gliding adaptation particularly useful [3]. This adaptation is most likely to have been selected for in order to reduce major injury due to falling, since the environment of these lizards is so high [5]. Ancestors of the Dracos were originally selected for their ability to assume a specific posture while falling [4]. These lizards oriented themselves so that their limbs and tail were spread out to be parallel to the ground.  In this position, the lizard had increased the amount of air drag to slow the speed at which it was propelling to the ground [4]. After this selection had occurred, those with more skin between their thoracic ribcage and forelimbs were more likely to have survived because these lizards had further increased their air drag compared to others. In analyzing the fossils of extinct Draco ancestors, researchers have found there to be very few intermediate forms, indicating the rate of this evolutionary process was quite fast [1].

Male Dracos are very territorial and typically inhabit one to three trees, so these lizards use their gliding mechanism as their primary method of moving throughout their territory [3]. Researchers have conducted extensive comparative gliding performance studies and have found that smaller Draco lizards are better gliders than their larger counterparts. As the ratio of body weight to wing area increases, both height and glide angle decrease [2]. This means that smaller Dracos with the larger wings are better able to glide between their territories and defend them compared to large Dracos with smaller wings. In these lizards, it is not the strongest and largest individuals with the highest fitness, but the smallest and best gliders.

The Draco lizards are an impressive organism; so keep an eye out the next time you decide to walk through the rainforests of Southeast Asia, as you might just see a flying lizard!