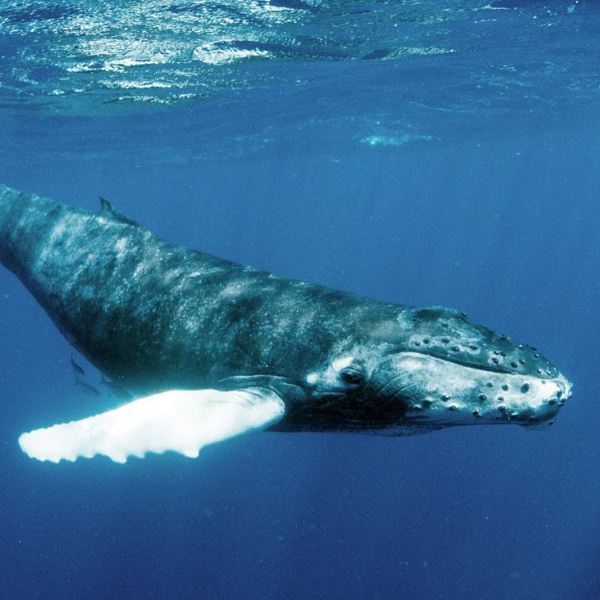 Humpbacks: From Fire to Ice provide viewers a unique look into the reproductive strategies of humpback whales across the Pacific Ocean. Just like birds, these whales use song to attract potential mates. All males near Hawaii sing the same song, and this song starts to vary over time. Sometimes a young male can even tag along and learn the song from an adult male so that he can potentially use it as a mating strategy in the future. Additionally, an adult male can tag along with a younger male calf and his mother as he wants a chance to mate with the female whale. He will swim along the calf and the mother until the mother is ready to mate. A particularly interesting phenomenon Sir David Attenborough explains is a bubble defense mechanism. If the whale feels like there is a threat or another potential mate in the area, he will cover up the calf and his potential mate by blowing bubbles and creating a type of screen.

Humpback whales are a type of large baleen whale that can grow up to 14.3 m by the time they are 17 years old. They feed on small prey species such as krill and herring. Their feeding mechanism involves swallowing a large volume of water and using a sieve to filter the food from the water. They also produce bubbles that corral fish for their meal [1].

Males usually mate with several females, a behavior called polygyny. Finally, due to the cost of lactation and minimal energy rationed for reproductive efforts, females are uniparous, or only bear a single offspring at a time [2]. Thus, females must be choosy when seeking a mate. Males, as a result, have to attract the females and compete with other males. Humpback whale’s mating behavior involves males displaying through song. Male dominance is also a part of the mating behavior, and, therefore, competition between males is common.

Humpback whales have the ability to produce loud, repetitive sounds that are called song. These songs usually last between 5 to 25 minutes and can occur over the period of several hours. The song varies over time, but somehow all the whales sing similar versions at any one time even though they are spread out over huge areas of the ocean. The primary hypothesis for the purpose of the songs is that they are used for reproductive displays [3]. These displays are used by males to attract females. However, there has been debate between this hypothesis and one for male-male sexual display. The prevailing theory that the song is used to attract females first appeared in Winn and Win (1978). Since then, evidence has decreased that song is used to attract females, and more evidence has arisen that songs are used to attract other males for male-male displays that might attract females. Studies have shown that singing humpback whales are regularly joined by other adult males. It is also likely that male assembly indirectly helps mating by providing a breeding ground. Interestingly, singing or sound making isn’t exclusive to humpback whales. A number of bird species utilize song to signal to other birds for territory [4]. Bird species also sing to attract mates. Some bird species will only mate with an individual if their songs are very similar, indicating relatedness [4].

While searching in the literature supporting bubble use as a mate/offspring protective mechanism, we failed to find substantial evidence for this unique phenomenon. We instead found that whales utilize a bubble mechanism to protect and ward off competing males. Humpback whales developed protection over the respiratory tract to block water and food from entering the pathway. Malfunction in the protection layer can cause drowning or choking. The humpback whales exhibit a “bubble cloud” behavior that may compromise this protective layer and put the whale in danger of drowning. The reasoning behind why the whales exhibit this behavior is not clearly known, however, scientists believe the “bubble cloud” may play a role in avoiding predators, capturing prey, and signaling [5].