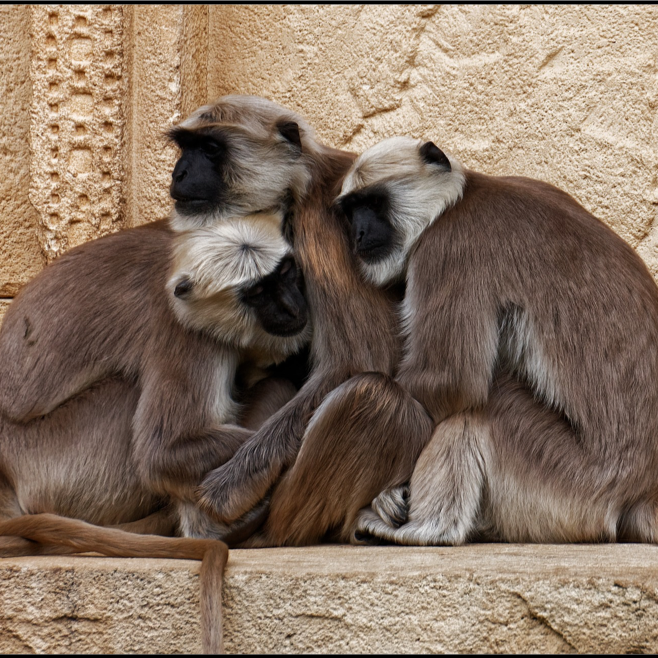 In India, Hanuman Langurs establish strong territories on the rooftops of Jodhpur. In episode 6 of Planet Earth II, Sir David Attenborough describes the langurs coexisting with the people of Jodhpur; they are fed well due to the local population’s reverence of the Hindu monkey God Hanuman. Hanuman langurs are within the colobinae subfamily of old world monkeys, so their diet consists of vegetation like fruit, flowers, and leaves [1], much of which is provided by the local human population [2]. Therefore, Hanuman langurs in Jodhpur have less limited resources in terms of food compared to wild langurs. An abundance of food allows these Hanuman langurs to allocate energy towards other aspects of fitness.

Attenborough states that twins are rare in wild langurs; however, twins have been observed in Hanuman langurs found in the city environment of Jodhpur. A study conducted by Rajpurohit et al. found that 0.79 per 100 births in this Hanuman langur population are twin births [3]. Twins are normally extremely rare in old world monkeys due to the high cost of weaning and raising these offspring with long developmental periods. However, previous studies on stumptail macaques have shown that twins can survive if there is human provisioning of extra food, as is the case in Hanuman langurs in Jodhpur [4]. With a more common occurrence of twins compared to wild langurs, Hanuman langurs found in Jodhpur show an increased fitness as they are able to pass on their genes at a higher rate due to the potential for an increased number of offspring per birth.