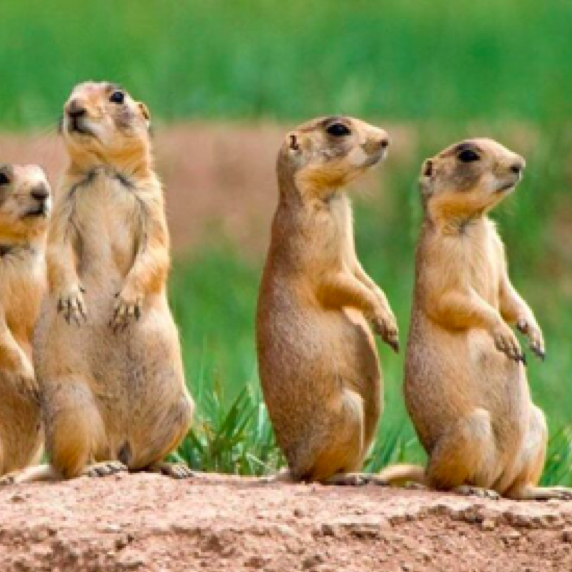 Do prairie dogs possess lingual capabilities? Animal House, a David Attenborough documentary, might lead you to believe so. In this documentary, Attenborough claims that prairie dogs have a unique language that they use to communicate with each other, alerting their communities to potential threats. Attenborough notes the remarkability of their language system and how unique it is for non-human organisms to possess such an ability. Scientific literature, however, seems to disagree with Attenborough’s robust claims.

In contrast to language, prairie dogs demonstrate a complex alarm communication system, which reflects intentional referential information regarding potentially-approaching predators [1]. The alarm calls give just enough information to others that there is a predator in the area, what type of predator, and where it is coming from [3]. Additionally, the calls may indicate different levels of danger of the predator [2]. Alarm calls are dangerous for the one doing the alarm but advantageous to the group [4]. Smith (1975) postulated as to why this alarm call system may have evolved, noting that it occurs particularly when kin are within the group that would hear the alarm.

This referential system, however, cannot be classified as language, as language would provide additional information, including but not limited to how to escape from a particular predator. There is also an incompatibility between the alarm and response, which categorizes prairie dogs’ calls as an alert system and not language [3].

Language may someday evolve in non-human species, but the likelihood of this already existing or occurring anytime soon is slim. Evolutionary changes are analogous to the growth of a bush in that evolution has neither an aim nor an end goal. Although all life most likely began as a one-celled organism, different evolutionary trajectories led to changes among organisms, which ultimately led to the emergence of different species with different morphologies. While some advanced traits may be similar between species, the path of evolution is rarely the same. This phenomenon accounts for the lack of the “language” path for Prairie dogs.

by Zachary Lembersky and Hayley Moyer