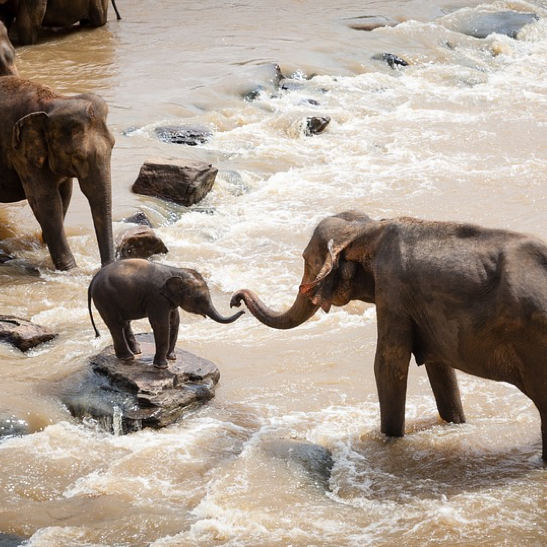 In the “Mammals” episode of the Life series, David Attenborough highlights the importance of the family unit for the evolution of mammals. He includes several examples of social cooperation in mammals: hyenas (at 27:00), meerkats (at 35:00), and elephants (38:00). Towards the end of the episode, a baby elephant slips into mud. The mother struggles to get him out. The grandmother then comes and gets the youngster out, passing her wisdom to her daughter. The general public tends to perceive evolution as a selfish phenomenon, but what if the “fittest” organisms are actually selfless? Mammals are a powerful group, and Attenborough shows how empathy (rather than egocentrism) has helped them in the natural world.

There are several different evolutionary theories that currently explain empathy. One of them relates directly to the mother-infant bond. Some researchers hypothesize that the evolution of empathy arose because of selection pressures for offspring to elicit responses from parents when in need of help. This required an emotional connection [1]. Over generations, this connection has broadened and animals can now connect with kin and non-kin.

Frans de Waal identifies consolation as a type of behavioral manifestation of animal empathy, where an animal comforts a distressed party because of an empathic concern based on emotional contagion [1]. Joshua Plotnik and Frans de Waal researched consolation in an elephant nature park in Thailand.  They found that bystander elephants tended to respond to the distress of another elephant by approaching the distressed elephant and providing physical contact and vocalizing with each other [2]. This supports what Attenborough was describing in his documentary. Elephants are aware of the emotions of other elephants and respond to their peers’ distress.  Similar behaviors have been seen in primates, dogs, and corvids [3,4,5].

There is a varying degree of empathy across different situations and species. Presumably, mammals have taken advantage of their ability to share emotions with their groups to increase their own chance of survival or the chance of their relative’s survival. Further research on empathy would help us identify how mammals use empathy to their advantage, but empathy is certainly a common trait across many mammalian species. Elephants, primates, dogs, corvids, and humans are prime examples of the success of kindness in the natural world. Evolution does not have to be selfish. In fact, some, including David Attenborough in his documentary, would say that shared emotion has allowed mammals to dominate the natural world, on land and underwater.