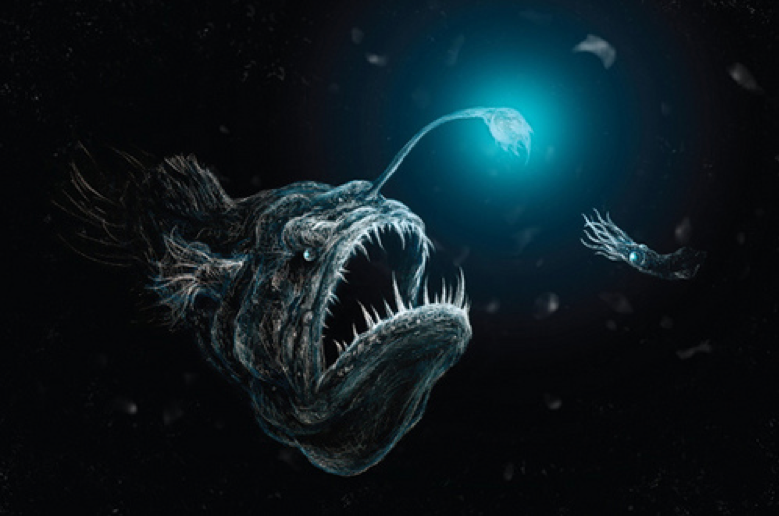 Anglerfish shine a light in perpetual darkness, but beware: Not all lights lead to safety. Anglerfish use bioluminescence to attract prey in the deep ocean. In The Blue Planet, a deep sea angler fish swims rapidly with its angler waving back and forth in constant motion. Anglerfish obtained their name from using their lures in a way similar to how fly fishermen use their imitation flies. These fish are in the order Lophiiformes , which consists of 321 species [1]. Of these 321 species, about half live in the deep sea. Not all deep sea anglerfish were created equal. These species, for example, vary in whether they have bioluminescent lures [1].

Marine organisms use bioluminescence for distinct functions. They can use it to attract prey (as seen in the anglerfish), to enhance vision for finding prey, for mate attraction, or even to expel bioluminescent fluid in order to escape predators [4]! For those animals using bioluminescence to attract prey, it is  used to attract sighted animals. Squids, for example, are attracted to the angler fish’s bright antennae, and are lured to their fate by the beckoning light. The lure does not attract non-sighted organisms, like many jellyfish [3]. This example shows that there is a drawback to having sight in the deep, as fish can end up lured to their doom. Thus, evolution of sight does not always mean better survival.

Another interesting evolutionary phenomenon displayed by some anglerfish is the unusual relationship between the males and females [1]. The two sexes mate with one another by fusing to each other. Females possess highly expandable stomachs that the males bite into when they reach the females. They then become permanently attached, and in a few weeks they become physically fused to the females. The male anglerfish will stay attached to the stomach of the female for the rest of their lives. This provides the females with a continuous supply of sperm from the male, which allows her to reproduce at the appropriate times. The males receive the benefit of constant blood circulation and nutrients [7]. The males and females probably coevolved to develop these peculiar sexual dimorphisms and physiologies that lead to their best survival being fused to one another. For example, the expandable stomachs of the females are alluring to the males so that they may bite into them more easily. They each also evolved channels in their bodies for fluids to flow appropriately to each organism to achieve their purpose, whether it is blood for circulation or sperm for reproduction.

The Blue Planet, Season 1, Episode 2, The Deep, starting at approximately 12:43