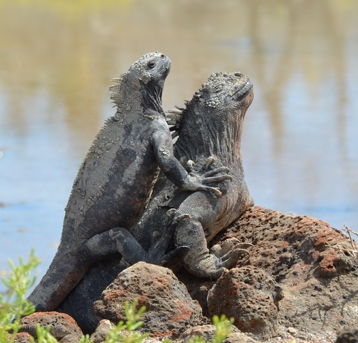 The Galápagos Islands have a rich history in the field of evolutionary biology. In addition to being the islands where Darwin developed his theory of natural selection, it is also home to thousands of species of animals. One of these species is the marine iguana, or Amblyrhynchus cristatus, a land-dwelling reptile that can, fascinatingly, forage for algae in the sea.

One would assume that the ability to swim would require certain specializations, like increased stamina, especially compared to other species of lizards. However, research has shown that marine iguanas do not have an advantage, like higher stamina or higher tolerance to submergence, when compared to other species of lizards or iguanas; their ability to forage for food underwater seems to be a behavioral adaptation meant to allow the iguanas to take advantage of alternate food sources [2]. The marine iguana is truly a fascinating animal!