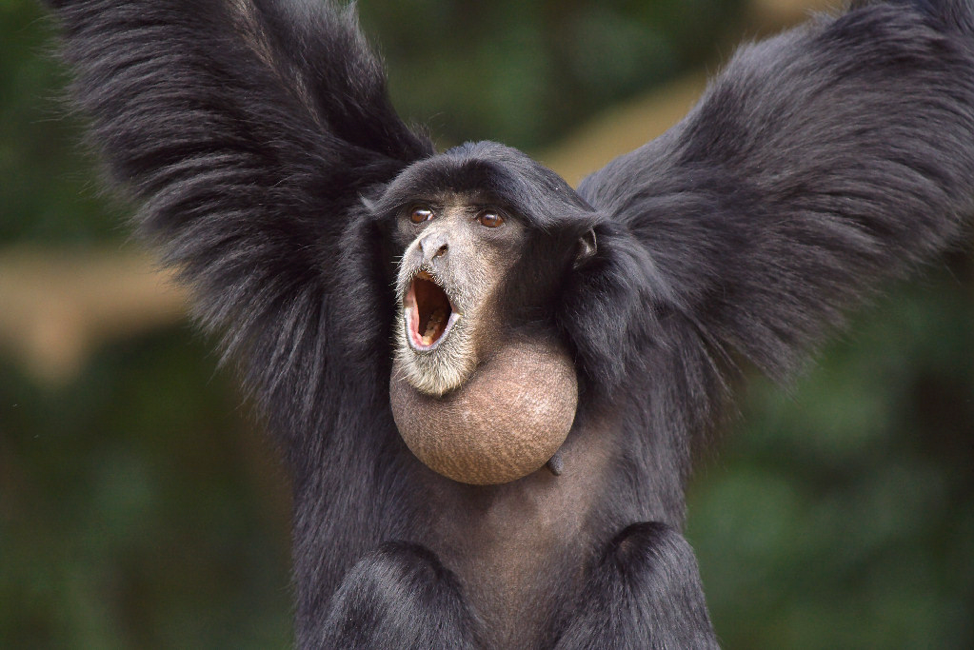 According to David Attenborough in Planet Earth, Season 1, Episode 8 “Jungles”, fig trees and other fruiting trees are very valuable, causing many monkeys to be territorial. Siamang Gibbons claim their territory through their calls, starting with a duet between the dominant male and female and then spreading through their group. But how does this ensure their claim on their territory?

Fig trees are very valuable to gibbons in general because they are of central importance in their diet [1]. Moreover, researchers have found that fig trees play an important societal role for gibbons. This is because researchers have found that the majority of Siamang intergroup encounters occur around large fruiting fig trees [1]. Because fig trees play such an important role in Siamangs’ life and are a limited resource, Siamangs are very territorial and protective of them.

As shown in Planet Earth, Siamangs claim their fig trees by calling, which starts as a duet between the dominant male and female. Researchers have found that mates sing these rigid coordinated duets to show their paired status [2]. These duets can ensure a group’s claim on a fig tree because these songs can convey other status characteristics of the caller as well, such as location, familiarity and sex [3]. Using these calls, Siamangs are able to alert others of an intruder in addition to warding off intruders. In fact, researchers have found that Javan gibbons, who are in the same family as Siamangs, initiate movement more quickly towards stranger songs than towards songs that they are more familiar, with such as from neighbors [3]. It has also been shown that these songs provoke direct interactions between groups of gibbons, such as approach and aggression, especially between neighboring groups of gibbons in areas of overlap [3]. Furthermore, beyond territorial defense, Siamangs use calls for intragroup contact and pair-bond strengthening [3]. Because these calls are such important signals, gibbons want to make them as loud as possible. However, there is also a trade-off between being loud to defend territory and risking being heard by predators [4]. Regardless, the next time you walk through a tropical forest filled with fig trees, you will most likely hear Siamangs warning you to not get too close and alerting each other of your arrival.